FabricPath has many advantages over the classical Spanning Tree Protocol. Mainly because it can use ECMP (Equal Cost Multi Paths) Routing.

For unicast frames it uses the well known Switch-ID that is inserted in a FabricPath header. This will be explained in a future post for sure. I have been intrigued regarding how multicast frames (Unknown Unicast – Multicast – Broadcast) are forwarding within a FabricPath network.

This sounds familiar to many network engineer and it has some similarities with Spanning Tree. The protocol starts building tree 1 and in order to do that, the topology will elect a root based on 2 factors:

If there is a tie in the priority, the system-id will be the tie-breaker.

Once tree 1 has been elected, FabricPath will elect the root of the second tree based on the same factor described above. The trees are both identified based on an FTag field within the header.

The multidestination tree 1 is bound to FTag 1 and will forward unknown unicast, broadcast and multicast frames.

Here is the topology we will be working on: 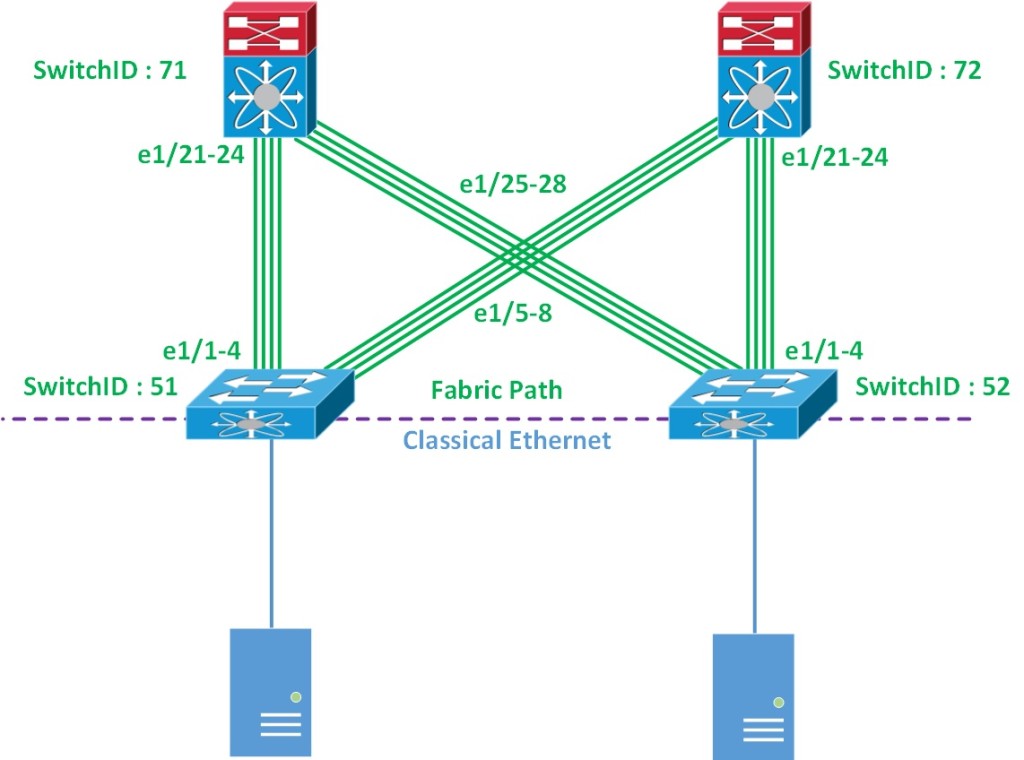 Let’s assume that the fabric path adjacencies are formed and stable.

Now let’s check how the system has built the trees and how can we verify it.

As you can see here, the system-ID looks like a MAC address and as explained above it is indeed a MAC address that belongs to the backplane of the nexus.

We can confirm that N7k-1 and N7K-2 are roots for the multidestination tree 1 and 2 respectively.

Now let’s check how the physical tree is built and what are the links that will be used for multidestination frames forwarding:

The command is self explanatory: The metric mentioned for multidestination tree is from the root of that tree to that switch-id

It means the following:

If you type the same command on all the switches in the fabricpath domain, you can draw the following topology: 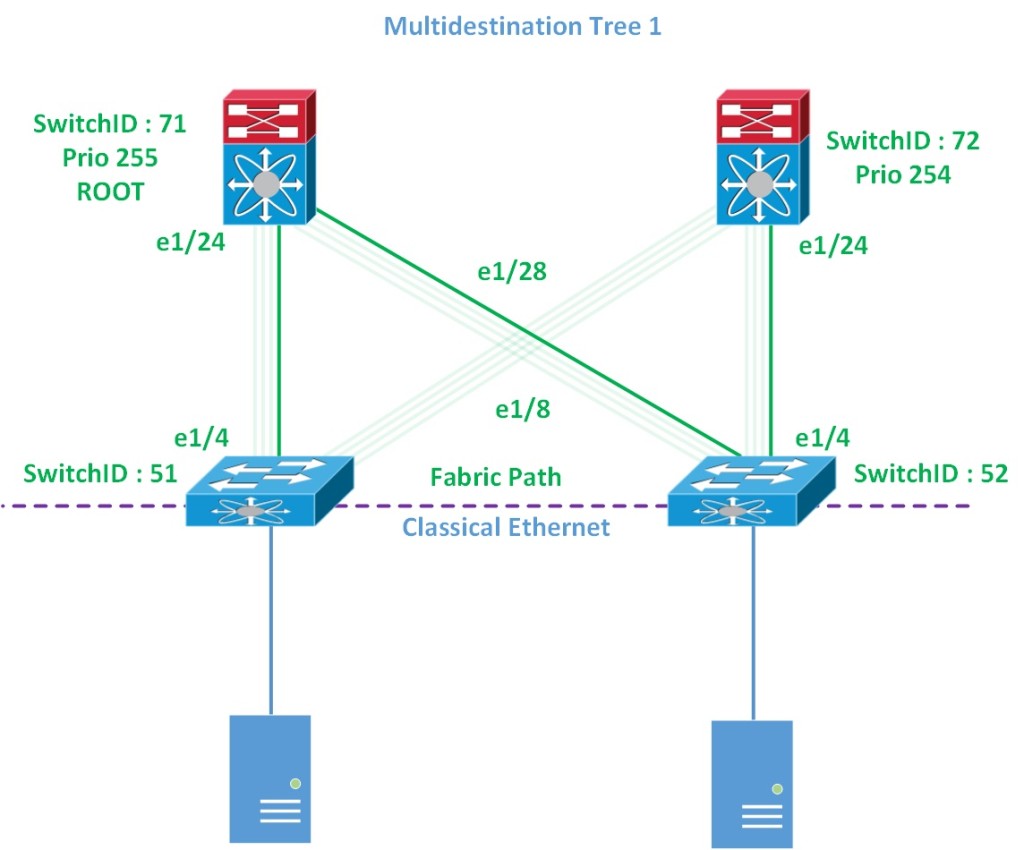 Let’s see how a broadcast is then forwarded within the FabricPath domain and more specifically on the multidestination tree 1:

Let’s say Server1 (which is on the left) sends a regular broadcast ethernet frame (Destination MAC: FFFF.FFFF.FFFF) to know what MAC should be used to reach Server2. The broadcast is forwarded within the classical ethernet domain and reach N5K-1.

N5K-1 recognizes that the frame is a broadcast and decides to forward it on tree one using port E1/4. A FabricPath header is added to the ethernet frame with the following characteristics:

N7k-1 receives the frames and recognizes that it is a broadcast assigned to FTAG1. Normally a FabricPath switch uses Switch-ID to forward frames but since this is a broadcast, the FTAG will be used in order to make a forwarding decision.

Obviously if a brodcast was sent from Server2, N5K-2 would forward the frame onto mutlidestination tree 1 using ports E1/8 to N7K-2 and E1/4 to N7K-1.

The fact that there is no redundant link for multidestination frames guarantees that there will be no looped frames in the FabricPath domain.

If you use the same command as I typed above, you can draw a topology for FTAG2: 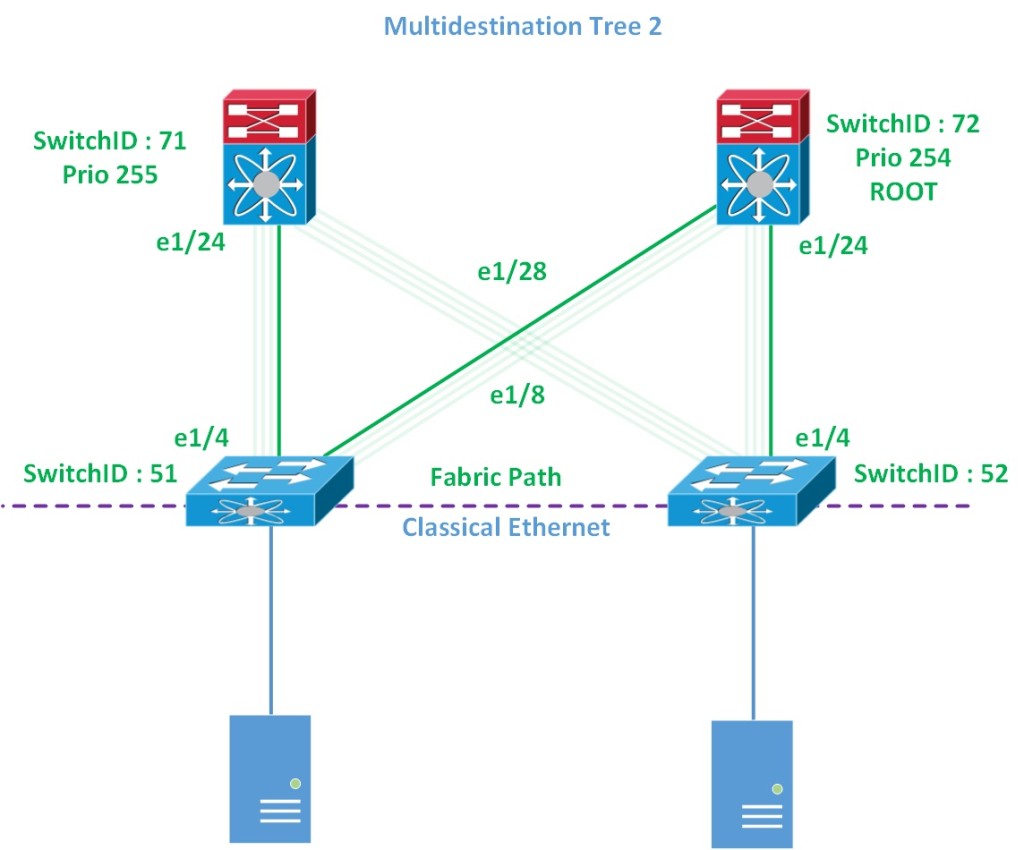 One of my customer had an issue regarding a Nexus 5K and its L3 daughtercard.

Everything was fine on the switch except that no adjacency could be performed with its neighbors.

I gave a quick look at the licensing and all was all right :

Then I checked that some L3 features are Up and running (If you have LAN_ENTERPRISE_SERVICES licensing model activated, it will be displayed “In use” right after you activate an advanced L3 feature like BGP – for more information regarding NX-OS licensing, please refer to Cisco NX-OS Licensing:

So everything is fine but my port is still in a down/down state:

It is very easy to misread this output (especially at 2am) because your eyes can focus on the “L3 Daughter Card” words and in fact you should read : “O2 NON L3 Daughter Card”

PS: This command is very interesting to check if L3 is globally activated on your N5k